If you’ve been following this blog long enough, you’ll notice many posts about the “Emotional Roots of Physical Symptoms” chart that I put together with my friends Alice, and Seneca. Seneca has a flower essence company and Alice helps people walk through inner healing.

When you work with people, you’ll always find out what’s going on in their lives, especially when your business focuses on health. Although our approaches vary from that of traditional medicine, our goal is to look at healing from an emotional viewpoint. Therefore, I personally believe that when you deal with the emotions, the body has the opportunity to respond. When I say “opportunity,” I mean that it’s a choice. Much of any healing program will depend on your individual choices in how the emotions are dealt with. Let me use myself as an example… 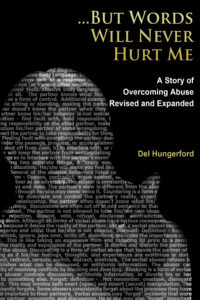 Not long after I’d left a bad marriage, I realized what a wreck I was. I even wrote a book about it during the healing process. Why a book? Because I wanted others who had gone through an abusive marriage to see how it actually escalates from beginning to end. Yes, you can find all kinds of books from counselors on abuse, many who have never been in an abusive situation themselves. Their books give snippets of a given situation but you don’t know what happened before or after. I wanted people to see the bigger picture. My book is titled “But Words Will Never Hurt Me” and it’s available on Amazon in paperback and Kindle.

During my marriage, my body started doing some weird things. That included getting a very strange type of fatigue that pretty much ruled my life for several years. I also had some weird issues with my eyes in that I was going to the eye doctor every five months to get a stronger prescription. In a sense, my prescription doubled in less than four years. I found that odd until I researched it out many years later. Basically, over the course of six years, I became a shell of a person. And, it was all due to words, actions, and attitudes of a husband who stripped me of everything I ever believed in. But, here’s the clincher… I had a part in that! Because I began to believe his lies, that’s when it started to affect me physically.

My family thought I was depressed. My grandparents even paid to have me undergo a complete physical. I was in the doctor’s office for about 15 minutes and all he could do was prescribe anti-depressants for me, which I took for five days and about went nuts so I quit. It was at that point I found a good naturopath who began to help me look at my health from a different perspective.

I bought all kinds of books to see if I was missing something. It’s when I purchased “Feelings Buried Alive Never Die” by Karol S. Truman, that some lights came on for me. In this book, Karol introduces the prospect that many physical symptoms are often due to belief systems, fear, anger, hurt, guilt, rejection, bitterness, etc. The list could go on… and on… and on… These are emotional states that I believe hinder us in moving forward. Until we’re willing to let go, forgive, and move on, yucky stuff continues to hang onto our bodies. Some of that is generational because we do carry the DNA of our ancestors.

As mentioned in previous blog posts, thoughts, intents, and words all create frequency. And, those frequencies stay in your body, including the ones passed down from your ancestral line. There is a lot of research that’s come out about this in recent years. Feel free to look up some research on what scientists call 95% of our DNA as being “junk DNA.” It’s only called junk because many don’t know what it’s there for. Uh, OK… moving on now.

Back on track…. it was a good rabbit trail.

In my situation, once I started to deal with some of the emotional issues (frustration, anger, sadness, etc.), I began to notice that my body started to heal. It wasn’t until then that I noticed marked differences. The biggest change was in my fatigue level. I also began changing my belief systems while pondering on the positive rather than negative things in life. It’s amazing how much we can change things just by adjusting our emotional state!

It wasn’t until I began understanding more about frequency and how thoughts affect us that a light came on connecting emotions with physical issues. Although I’d known about Karol’s book since the early 2000’s, I didn’t spend a lot of time working through stuff. It wasn’t until I put some principles into daily “practice” that I started to see results. Eventually, what I called the “funky fatigue” completely went away. But, it took 13 years after my divorce for that to happen. Looking back on it now, I wonder if part of me enjoyed feeling sorry for myself?  You have to come to the end of yourself in order to move on.

So, when I began to work with Seneca and Alice on how our emotional states can affect us physically, I’d had some practice in dealing with it. It’s hard to lead someone where you haven’t been yourself. I’m sure you’ve all heard that statement. When we began assembling our chart, we used personal and customer situations, Karol’s book, in addition to other similar sources. Since our chart came out, I’ve looked up a physical situation as it tries to creep up into my body. I have to be honest with myself and look at the emotional roots. Once I walk through a process of forgiveness, my physical body generally starts to come into line. To keep myself clear of physical symptoms, I make it a daily practice to keep negative stuff away from me.

How can this help you?

I encourage you to sign up for the Healing Frequencies Music newsletter to. You’ll get the full Emotional Roots of Physical Symptoms chart for free within the first month! Here are some tips to help you along the way:

We all deal with physical issues in our bodies. I propose that much of what we experience physically can be alleviated by addressing the emotional state. When we choose things to boost the emotional state (flower essences, inner healing, music, etc.), and are consistent with a program, I believe there’s long lasting benefits within the physical body. I’m saying this based on my own personal experience, as you read concerning my marriage.  I’ve also heard positive comments from others who have followed a similar path. Frequencies in thoughts, intents, and our words really do affect us. As you ponder on that, think about what takes up your thought life as well as in the words you say. Are they affecting you negatively? If so, consider some of the suggestions above.

EMDR music is very helpful in working through traumatic experiences, such as abuse, various emotional traumas, and especially PTSD. I have several songs available in the EMDR format. CLICK HERE to learn more about them.