Home Albums In the Resurrection Code

In the Resurrection Code

In the Resurrection Code 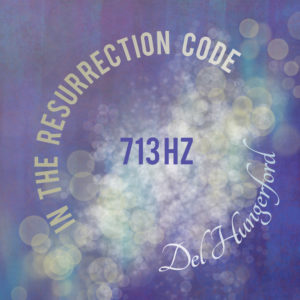 “In the Resurrection Code” is an album that happened without expectation. In other words, I didn’t sit down with an intent to create a new album. It happened as a result of me spending time before Creator seeking to understand more about being “in Him.” Someone had ordered a personal song. I decided to do that song with the 713 Hz frequency and after completing it, this album started to flow out of me.

Since the spring of 2017, I’d been meditating and marinating (as I call it) on the death, burial and resurrection scene as described in Matthew. I’d also been taking the 713 Deep Restoration music (sound) essence for several months. In my opinion, the essence only added to the depth of what I felt coming through this experience. I engaged the death, burial, and resurrection story of Jesus (Matthew 26 – 28). While creating the music, I was seeing the scene play out in my imagination. At the same time, I was stepping “into Him” as a participant in the resurrection process.

The album was finished on May 18, 2018 – a year to the day that I finished “Deep Calls to Deep.” Below are descriptions of each song in the album with a sample. This is an “album only” purchase since all three songs flow together and are meant to be listened to from the beginning to the end.

Album Title: “In the Resurrection Code”

The music for “In the Resurrection Code” is considered program music where it’s meant to depict a certain event. The music flows gently from song to song with no breaks. As you listen, you can hear the sadness and emotions of Jesus in “Living Sacrifice.” During “Recalibration,” the music moves from major to minor in a steady triple meter rhythm. The constant change between major and minor reflects the process of the internal change in Jesus’ body while in the grave, in addition to His emotions leading up to his death. The human part of Jesus has to be in extreme pain because of the horrific beating he suffered. At the same time, the Divine part of Jesus knows His sacrifice will bring transformation that the human race can step into. That is evident in the free-flowing sounds of the song “Transformation.” Bells, a crystal bowl, and the “angel theme” from the song “Wings of  Spirit” is brought back as Jesus is seen ascending into heaven.