Home Music and Frequency Truth About the Ancient Solfeggio Frequencies

Truth About the Ancient Solfeggio Frequencies

Before I begin this post, let me point out that if listening to music created with the Ancient Solfeggio Frequencies is helpful for you, please continue. As I’ve said in an earlier post, I believe that the intent and desire of the recording artist bears as much weight as the actual frequency. 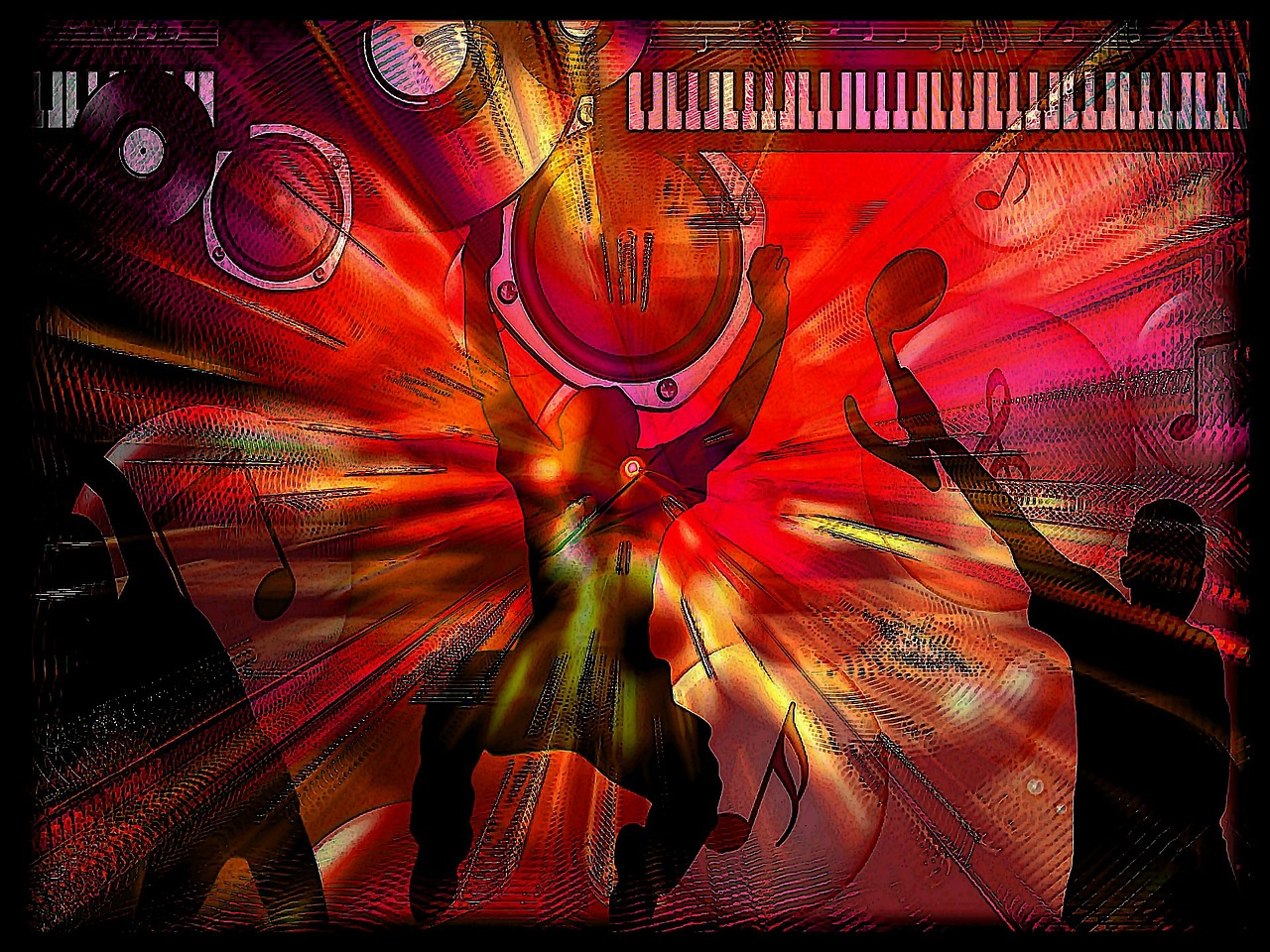 This post comes from questions about my music, specifically why I’m not recording with the Ancient Solfeggio Frequencies. While I was deciding what frequencies and tuning to use, I began researching the Ancient Solfeggio Frequencies and found some major discrepancies. Although I chose the A=432 concert pitch as my standard, I have recorded with the 528 Hz  in the albums 528 Creative DNA and Deep Calls to Deep.

Let’s start with my Cliff Notes version on the Ancient Solfeggio Frequencies – what they are and where they were supposed to have come from.

My point with this article is to present accurate information. We tend to believe what’s out there is truth because enough people seem to be saying the same stuff. I was in that place with the solfeggio frequencies until I started looking into the music theory part of it. That’s when I realized there was a problem. With that introduction, I’ll take the points from the list above and break them down.

Joseph Puleo was said to have been visited by an angel. The angel directed him to some scriptures that eventually led to the belief that these numbers represented musical frequencies. That’s the two sentence synopsis. Problem… we didn’t have a chapter/verse numbering system for the Bible until 1450 to 1500 AD. That’s nearly 500 years AFTER Guido d’Arezzo was said to have come up with these tones. It would seem that he would have needed the Biblical chapter and verse to create the solfeggio frequencies. How could he have done it when the Biblical numbering system didn’t come until nearly 500 years later?

Guido d’Arezzo is the dude responsible for coming up with modern musical notation and inventing the solfeggio system. He put a melody to the Hymn to St. John the Baptist to teach his students how to sight sing a piece of music. For those who don’t know what that means, a trained musician can look at a piece of music and sing it accurately without actually knowing the tune beforehand. Music majors spend a lot of time in school learning how to “hear and write” as well as “see and sing” a piece of music they’ve never seen and/or heard. When I was in college, we called it “ear straining” and “sight screaming.” Oh… the joys of 8:00 AM theory and ear training classes when you’re still half asleep.

For Guido, having a system of notation and learning how to sing music drastically changed the process of learning the plainchant repertoire. Prior to his system, the chants were passed down by rote and it took the monks nearly ten years to learn all of them. With only minor changes, we still use Guido’s system of sight singing and musical notation today. In a sense, Guido d’Arezzo is the father of modern ear training and sight singing. Guido’s “scale” is based on natural ratios (Pythagorean tuning or temperament).

With that background on Guido d’Arezzo, we can now look at the next two points concerning the Hymn to St. John the Baptist and the solfeggio scale. The basic “scale” (with minor changes in temperament) that we now use in music has been in place since the time of Pythagoras, or about 500 BC. It was 1,500 years later that Guido assigned scale names (ut, re, mi, fa, sol, la) to musical pitches. If you look at the Hymn to St. John the Baptist, you’ll notice the tune goes up by scale degree (C = Ut, D = Re, E = Mi, F = Fa, G = Sol, and A = La). 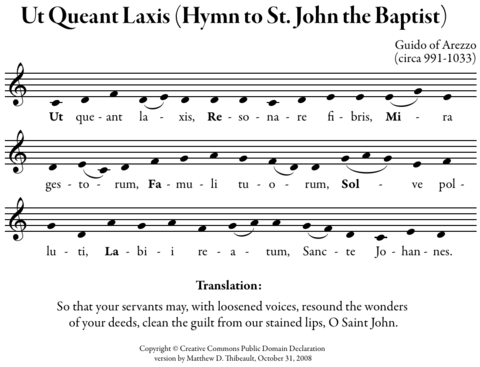 Here’s the problem with the ancient solfeggio scale – If you actually go online and hear a tone generator play the pitches and compare that scale to the scale Guido used, it’s not the same scale. The frequencies, 396, 417, 528, 693, 741, and 852 make up a different scale where the distance between the notes are extremely different from the scale in the Hymn to St. John the Baptist. It doesn’t matter whether an instrument is tuned to A=440, A=432, or A=444, the distance between pitches will be determined by temperament, not concert pitch. Temperament and concert pitch are two different things; tuning adjusts the pitch (Hertz) of a single note while temperament adjusts the overall pattern in the distance between all notes of a scale. Part of the problem behind the ancient solfeggio tones is that people are using the terms “tuning” and “temperament” interchangeably.

We use equal temperament today, which means that the distance between notes is mathematically equal. At the time of Guido, they used Pythagorean tuning, where the distance between each note was not quite equal. The Pythagorean scale is only slightly different than the equal tempered scale. To the untrained ear, it would be difficult to hear the difference. Click on this VIDEO to listen to a comparison between equal tempered, Pythagorean, and the ancient solfeggio scales. If you were to actually sing the Hymn to Saint John the Baptist using the exact frequencies for the ancient solfeggio scale, it would sound extremely different and probably pretty ugly. There is no temperament ever used that matches the ancient solfeggio frequencies. There has been no scale known in any part of the world that matches them either.

To answer the question about whether these tones have special healing powers, I believe that’s an individual call. Everyone responds to music differently. My suggestion is that you listen what speaks to the very core of your being. And, the music choices may vary depending on your mood, what you need, and what you wish to accomplish through the use of music.

My personal opinion is that if these tones are indeed musical frequencies, they are NEW and not from 1,000 to 3,000 years ago (as said by many). Because they have nothing to do with Guido d’Arezzo or the Hymn to Saint John the Baptist, I suggest that we start looking at what they mean for these new times. It’s highly conceivable these tones would be used in 20th century music writing and by using music theory terms, “experimental” scales/tones. These tones do not build any scale known to musical historians and cannot be used by changing the basic tuning of an instrument to A=444, A=440, A=432 or any other. A combination of A=440 and A=444 works for all but two of them.

Although the proposed history behind these tones is inaccurate, that only means we haven’t come to the correct understanding of what they really are.

I think that Jamie Buturff has the best explanation as to what these tones are. Check it out for yourself by clicking HERE to watch his videos. However, I’ll restate what I said in the beginning… if the ancient solfeggio frequencies work for you, then use them. It’s all about the intent and the desire of the artist(s) creating the music. Lastly, if you really want to nerd out on this subject, feel free to read my article “Ancient Solfeggio Frequencies and Pythagoras” for more detail. I even made a fun video with examples to help demonstrate what is hard to explain in words only.