Who are Joseph Goebbels and Leonard Horowitz?

My research for all my articles and blog posts began with Goebbels and Horowitz and the popular 528 Hz “love” revolution. At first, I was quite enthralled by what I found. Eventually, I started seeing some discrepancies in the “scale” of the solfeggio frequencies and this has made me more curious.

With that, let’s take a look at what Goebbels and Horowitz have to do with healing music…

Joseph Goebbels was a German Nazi politician and Reich Minister of Propaganda of Nazi Germany from 1933 to 1945. He was said to have worked with Hitler in setting the international concert pitch to A=440 in 1939. The A=440 concert pitch was meant to cause chaos, eventually driving people crazy. There are documented forms of “sonic warfare” and according to Horowitz, the A=440 concert pitch causes the necessary chaos within us to drive us all “ape-she-bong” (as one of my friends says). CLICK HERE for a great technical article by another professional musician (Roel). He goes into much greater detail about the standardization of concert pitch than I do. So, if you want to geek out on this subject, check out his blog.

My thoughts about this whole conspiracy theory: 1) Way before 1939, A=440 was already highly in use, especially in America. 2) Sonic warfare by Hitler involved playing annoying music over loud speakers for hours on end. With sound amplification in it’s infancy during that time, I’m sure the sound quality was scratchy and awful. I would liken it to running your fingers down a chalkboard. No matter what concert pitch was used, the sound quality would have been so horrible, I’m sure dogs howled all day long.

My original question centered around how a “scale” of notes in the solfeggio frequencies is supposed to be in a hymn (Hymn to St. John the Baptist) but isn’t actually in the hymn. Why? The ancient solfeggio “scale” is not the same scale that was used by the composer of this hymn. The guy who invented musical notation (a monk named Guido d’Arrezo) wrote this hymn to teach his students how to sight sing a piece of music. We still use his form of sight singing today, and, it sounds nearly the same now as it did then. Based on this information, the solfeggio frequency scale has nothing to do with the “Hymn to St. John the Baptist.”

It’s all about the Joseph Goebbels incident where he supposedly wanted to wage war on people’s minds by changing the concert pitch. Not that it isn’t possible, but, there are other factors to consider in why the standard concert pitch was chosen as A=440. It seems a little far-fetched that this really happened, especially since musicians had been toying around with setting the concert pitch at A=440 way before Goebbels even came into the picture.

I teach music at the college level and know plenty about music theory and history. That being said, before we had technical devices that told us a specific frequency, musicians had to do everything by ear. It’s no wonder that every region had their own concert pitch. In most areas of the world, that concert pitch hovered in the A=415 to A=435 range. European orchestras and musicians have tended to prefer higher concert pitches (above A=440). Basically, concert pitches and tuning systems (just intonation and various forms of well-temperament mainly) varied incredibly from musician-to-musician and region-to-region.

Now, looking at how higher pitches play into this… Have you ever listened to Beethoven’s 6th Symphony? The fourth movement depicts a thunder storm. I remember playing this epic piece of music with the Philharmonia Orchestra of Yale at Alice Tully Hall in New York City. From the perspective of sitting in the center of the orchestra, by the time you get to the storm, it’s pretty loud. Where are the ear plugs when you need them? The entire orchestra is at their loudest level by the middle of the movement. In the midst of all that loudness comes a lone piccolo piercing through the massive orchestra. How is this possible that such a tiny instrument can pierce through an entire orchestra? Well, acoustically speaking, higher pitches are louder than lower pitches. Therefore, if you wanna be heard, play higher! 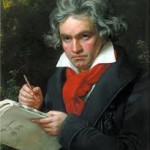 Are you aware that amplification for musical instruments was in its infancy in 1939 when some claim that Goebbels had something to do with setting the concert pitch to A=440? Consider for a moment that a musician needs to project in a large concert hall or at an outdoor venue. Now, we simply mic them. However, before the 1950’s, since there was no sound system that could do it, all it would take to get more volume would be to make an adjustment in the concert pitch or add more musicians. As noted before, European groups have traditionally played at higher concert pitches anyway. It would seem to me that musicians would have understood (like we do today) that raising the pitch would be similar to turning up the volume. In addition, higher concert pitches are brighter in tone quality, which aids in projection of the music.

Some of the Italian dudes preferred a lower concert pitch. In fact, A=432 was a top choice. (This is where Verdi’s “A” comes into the scenario.) Singers loved it because they didn’t have to strain their voices as much. And, lower concert pitches have a mellower sound that appears to feel more settling. Although I use different words, I believe this has been documented throughout music history: The higher the concert pitch, the brighter the tone. The lower the concert pitch, the mellower and “darker” the tone will be. However, along with lower concert pitches, you’re gonna lose some volume. Before times of amplification, musicians would have had four choices: 1) add more musicians, 2) raise the concert pitch so they’d have a brighter sound that would carry further, 3) use instruments made for projection (especially brass instruments), or 4) both some combination of the three.

The end of this story goes something like this… do some homework on your own and don’t swallow what someone else says is fact. Take what I’ve presented and make your own decision about any conspiracy theory regarding our current concert pitch of A=440. The stuff about the ancient solfeggio frequencies – A little music theory and ear training shows that while listening to the hymn and looking at the actual notes of the ancient solfeggio frequencies that there’s truly a problem in River City (Sing along now…).

I tend to think people are having positive results to the music created from the solfeggio frequencies because of the “intent” of the musicians recording the music.  There’s plenty of research out there to show music affects our emotions and psyche. So, when choosing to purchase music recorded with the solfeggio frequencies, consider reading about the purpose, objective, and goal of the musician recording it. CLICK HERE to read my blog post on musical intent.

As usual, if you find something either to refute what I’ve presented or agree with it, I’d love to hear about it in the comment section below. My only request? Be respectful to one another, especially when we disagree.

Consider this article for further reading and discussion. CLICK HERE … It has a lot of information all in one place. Check out for yourself the validity of what is presented. It’s also important to note that if you want to use the solfeggio frequencies, they will NOT work if you tune your instrument to A=432 or A=444. I’m not sure this is pointed out very well in the article.

My personal opinion is that if the solfeggio frequencies are indeed musical pitches, they originated in the 20th century and are not from ancient times. It’s highly plausible they could have been used by an experimental composer during this time period. Jamie Buturff has a great explanation as to what he thinks they are. Check out his videos by clicking HERE.