Home Music and Frequency Cymatics is Music in Pictures

Cymatics is Music in Pictures 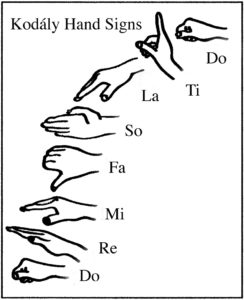 Imagine that you’re an ancient Sumerian who wants to notate musical frequencies or a simple melody. How do you do it? Was it even possible during their day? Musicologists have said that musical notation didn’t appear until about 1,000 AD during the time of Guido D’Arezzo, who invented solfege (Ut, Re, Mi, etc.). His method of teaching his students led to our current system of musical notation. Before that, lines, squiggles and a myriad of other marks (neumes) indicated pitch direction. But, we’re told there was no way of determining the starting pitch or intervals between notes. With cymatics, we’ll discover a form of musical notation, present in nature, that allows us to determine exact pitches.

In Figure 1, we see the hand signs associated with our modern musical scale for solfege. Zoltan Kodaly created these hand signs as part of his teaching method for children. His goal? Teach musical literacy in schools through the use of our natural instrument – the voice. Enough with the music history lesson. CLICK HERE for the truncated version on how we came into our modern musical notation. With that, we shall move on… 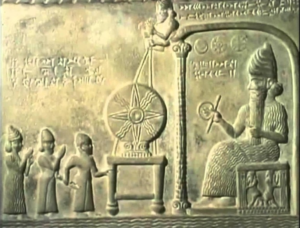 Cymatics is a visual representation of sound. If you can figure out which cymatic pattern matches a specific note, the exact concert pitch can also be determined. To answer my first question in this article, it appears the ancient Sumerians, as well as other ancient civilizations, probably understood how to capture musical pitches in picture form. They simply did it through cymatics. We didn’t call it cymatics until Hans Jenny “named” it in the late 1900’s. It works like this… put sand, powder, or something similar onto a membrane that’s stretched over a resonating chamber, sing/play a note, and the membrane responds to that sound by creating a shape. Some believe this is how the pictographs of the Hebrew letters were actually formed.

Back to the Sumerian tablet for a moment. In Figure 2, you’ll see the round “sun” item on what looks like a table. It’s nearly identical to a cymatic shape that I measured at 287.4 Hz. Somewhere on YouTube, a user shows this sun shape as a reference point. In another frame, a tone generator excites the salt on a Chladni plate and once the shape matches the picture on the stone, I held my tuner up to the computer and wrote down the frequency. It’s interesting to note (no pun intended) that in the A=432 concert pitch, the D just above middle C on the piano, is 288 Hz (just intonation). The point here is that it’s possible to recreate a musical pitch through finding its shape. I call this the earliest form of musical notation – or, notation by shapes.

Revisiting my comment about the sound of the Hebrew alphabet, let’s ponder a similar experiment. John Stuart Reid, a musical acoustics specialist, tells of a time that he went to the Great Pyramid of Giza and conducted acoustical testing on the sarcophagus in the King’s chamber. His guide, an Egyptian man, was quite bored until certain notes brought out standard Egyptian shapes (Eye of Horus, etc.). To access Reid’s discussion of that project, CLICK HERE. As I read his notes, my mind went back to what I’d heard the Rabbis saying concerning the Hebrew alphabet. They teach that the “aleph-bet” is a set of living letters. How can that be unless they were first created from sound? Reid’s experiment indicates that sound created Egyptian figures so, it’s not far-fetched to believe the Hebrew letters were formed in the same manner. It would be interesting to do a cymatics experiment comparing Hebrew pictographs to cymatic shapes. Hmmm…..

We turn now to the Rosslyn Chapel in Edinburgh, Scotland. On the ceiling of that chapel are over 200 stone cubes with curious shapes on them. They criss-cross over the ceiling in one section of the chapel. Near the top of various pillars, the cubes end with an angel playing a musical instrument. The stone musicians, frozen in time, play instruments of the time period – the 1440’s. They are carved with such detail that musicologists can determine the exact instrument and how many notes each instrument could play. Some of the musicians are singers with a book opened up towards the public. This seems to indicate group singing. Scholars for years have known this area of the chapel has something to do with music but were unable to determine how until a man named Thomas Mitchell came along. He’s a code breaker and also a musician, specializing in Renaissance music. CLICK HERE to see a four-minute video on how that discovery was made.  Figure 3 shows three of the cubes with the corresponding cymatic shapes. The pictures at the top show the cube in the arches. The pictures are from Mitchell’s Book titled “Rosslyn Chapel: The Music of the Cubes.” 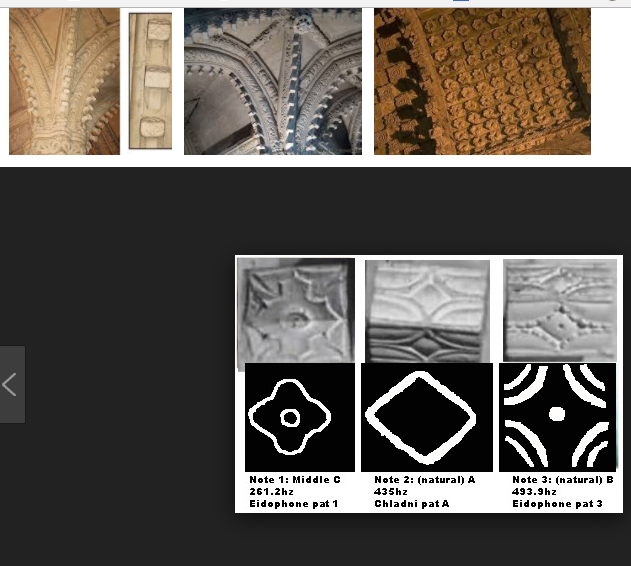 In looking at the cymatic pictures, one can see the exact note and concert pitch assigned to a specific shape. The shapes on the cubes are slightly more ornamented but the basic shape is still there. Here is an article in the Journal of Cymatics that includes another short video, showing how Mitchell found the proper note for each shape on the cubes. As you watch the video, you’ll see a Chladni plate with sand sprinkled over the top of it. It’s then hooked up to a tone generator. As the pitch ascends, the shape locks in and becomes more intricate. It’s actually quite fascinating to watch! In another YouTube video titled “Rosslyn Chapel Cymatics and Music Connection with China,” it begins to make sense how the builders of the Rosslyn Chapel understood cymatics. Chinese gong makers use cymatic patterns to determine correct pitches and harmonics. It’s a technique they’ve used for over 5,000 years.

When I first discovered Mitchell’s book (available on Amazon) and his videos on YouTube, I shared the findings with a fellow music professor. At first, we wondered about the “stave angel” that’s discussed in the above video. Neither of us thought the five line staff was in use in the 1440’s. However, after some more research, I have found evidence that a five line staff did exist at this time but was hardly used… yet. In knowing that many of the stone workers came from all over the world, more than likely, they brought with them the latest fads of the day. It’s my guess that this new staff notation was probably one of those. The big question? Why would these stone masons put a musical melody on cubes, in a ceiling, and in the form of cymatic patterns? Was there something they were trying to hide? Or, was it a way of showing their prowess with what they considered modern technology of the day? We may never know the answer to that question. 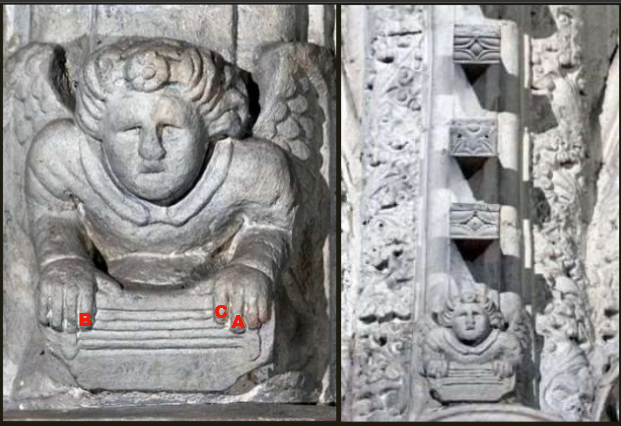 In Figure 4, I’ve labeled the note names the stave angel is pointing to. I find it interesting that the cymatic shapes directly above the head of this angel match the note names on this new musical five line staff. At first, it was believed this angel played another instrument but, it didn’t match any of the instruments found during that time period. It was only after Mitchell decoded the cube melody that he realized this angel is positioned at the start of the entire tune. It’s with a new set of eyes that both Thomas and Stuart Mitchell figured out the angel’s purpose.

If you understand performance practices of the Renaissance era, putting this musical puzzle together is a challenge but not impossible. If you watched the first four-minute video (at the beginning of this article) where the curator at the Rosslyn Chapel describes skepticism about the cube music, a mix-up in the cubes is easy to fix through the understanding of Renaissance musical compositional techniques. It requires knowing music theory of this time period to make needed adjustments. It’s like any puzzle where there are lots of pieces and as it comes together, a beautiful picture emerges. Decoding the music of the cubes was very similar. The Mitchell duo took their knowledge of Renaissance music history and theory. With that knowledge, they discovered a musical melody from the cubes that sounds exactly like a piece of music from the early 15th century. Coincidence? I don’t think so.

Let’s take another leap here. If the cubes represent musical notation in the form of cymatics, maybe it’s possible to look at other cymatic patterns in nature to determine their exact musical pitches. In a sense, instead of Pythagoras’ “music of the spheres,” we’ll discover the “music of nature.” I also find it interesting that some cymatic pitches/shapes line up in the general range of the A=432 concert pitch (Figure 2 is an example). The Rosslyn cubes are in the A=435 concert pitch, which is close enough to A=432 that it would be hard to hear the difference. 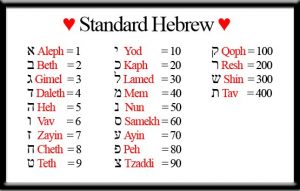 Let’s revisit the Hebrew Aleph-bet once again. I believe that I’ve found the musical frequencies for each of the Hebrew letters using one of the many forms of Hebrew gematria. But, before I share those results, I’m waiting for confirmation from a Hebrew scholar. That being said, I also believe it’s possible to find a musical pitch for each of the Hebrew letters by comparing the pictographs with cymatic patterns. It will be interesting to see how these pitches match with the gematria. Because we’re also dealing with musical harmonics, the results could be complimentary but not the exact same pitches. In Figure 5, each of the Hebrew letters is shown in Hebrew, followed by the English spelling of the letter, and the “standard” gematria. There is a version of gematria where final forms of certain letters are added on the at the end, taking the numerical system up to 900.

Through the use of cymatics, I think it’s possible to see our musical universe in a new and beautiful way. Cymatics is in nature, in crop circles, in stone circles, and many other places. It lends to the belief that everything is living and moving, even what we consider ancient alphabets. We are told that “in the beginning God created the heaven and earth.” (Gen. 1:1) In the next verse, it says he “moved” (Hebrew word -rachaph) upon the earth. The Hebrew word for “moved” means to hover, shake, or flutter. That sounds like a frequency to me. Based on Rabbinical teachings, sound (frequency) is what started everything. It would only make sense that the Hebrew letters would also represent sound. Even in meditations of various religions, mantras and “toning” are used as part of their worship and healing practices. Nikola Tesla said that everything exists because of sound.

Through sound, AKA, frequency – we begin to see how everything in our universe is based off sound. At some point in ancient traditions, someone figured out that sound could be measured via the shapes of cymatic patterns. It wasn’t until just over 200 years ago that we actually put a name to it. It’s obvious by archeological findings that for thousands of years, people understood that sound could be imprinted into shapes. Once we decode those shapes through the use of cymatics, we have ourselves measurable musical frequencies. Therefore, cymatics is truly our earliest form of musical notation.

As usual, feel free to leave comments below. If you have interesting information about anything discussed in this article, please share! If you’d like to hear some of my music that’s inspired by the use of numbers, have a listen to “In the Resurrection Code.” It’s based on the code within 713 Hz.