In the posts under the title “Musical Frequencies of the Hebrew Letters,” I present the basic information that I considered when looking into the letters of the Hebrew aleph-bet as they correspond to musical pitches. For those who want the actual pitch chart, that can be purchased by CLICKING HERE. Along with an instruction PDF, and a frequency chart, I provide an audio on how to create music using the Hebrew letters. 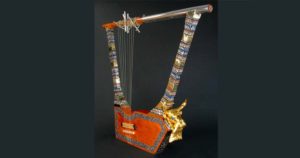 I found it necessary to go much further back into music history than I’d ever gone before. Those types of studies are usually reserved for people who pursue a PhD in ethnomusicology or archaeomusicology. During my college years, I was more interested in performing over studying ancient music. I’m thankful for those who have a passion for ancient music. Richard Dumbrill is one of those people. Wikipedia says that he “has devoted his academic career to the study of the archaeomusicology of the Ancient Near East, especially the interpretation of cuneiform texts of Music Theory written in Sumerian, Babylonian and Hurrian.” After a couple conversations with him via e-mail, he was kind enough to send me a copy of a paper titled “The Truth About Babylonian Music.” His paper helped me understand how those in Biblical times probably created music.

We know the Israelites co-mingled with many eastern cultures. Everyone in the near east had ready access to what others did and how they did it. Richard Dumbrill is probably one of the the world’s leading experts in archaeomusicology so I trust his research. Fair warning! Without a good understanding of music theory and history, he’s not easy to understand. I find it interesting that he notes at the end of the video titled “Dumbrill on the Silver Lyre od Ur,” that a musical system closer to what we know today wasn’t used until around 1,000 BC. That would be about the time of King David. 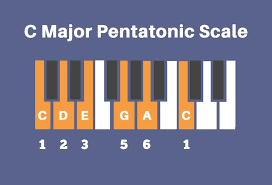 When Dumbrill tunes the harp (towards the end), he discusses how it’s all done through intervals (the distance from one note to the next). The important tuning intervals for these lyres was perfect 4th’s and perfect 5th’s – both prominent intervals in the harmonic series. He comments that people understood harmonic laws at least 5,000 years BCE. Music historians note that the natural scale pattern is the pentatonic scale. Dumbrill mentions this, too. As seen in figure 1, the C Major pentatonic scale is made up of 5 notes, skipping the notes “B” and “F.” The “formula” for a pentatonic scale is M2-M2-m3-M2 before it repeats in the next octave. Start on any note and follow this formula to build a pentatonic scale. M2 = Major 2nd or whole step and m3 = a minor third or three half steps. As far as musical historians can tell, this scale has existed as long as we’ve had the ability to make music.

I found it important to look for patterns first and foremost. It required delving a bit deeper into music history, theory, temperament, concert pitch, and tuning before I saw some of those patterns. I experimented with every form of gematria, thinking that I had to be missing something when nothing made sense. I knew to move on when a pattern or natural law couldn’t be found.

Everything in music is based off the harmonic series. There are natural harmonic laws that are a part of the world around us, just like the law of gravity affects everything on earth. We’re bound by those laws whether we like it or not. It’s important to consider natural laws when looking for answers. This is one of the reasons I disagree with what some say (historically and musically) concerning the solfeggio frequencies. They don’t fall into the natural laws of harmonics. In order to assign those numbers (396, 417, 528, 639, 741, 852, etc.) as musical frequencies, they should follow the natural laws of harmonics. Since they don’t, I think they’re something other than musical frequencies. That being said, anyone can pick any musical frequency and create music with it. When mixed with intent, it’s a musical recipe created for a specific purpose. Most musicians that use the solfeggio frequencies, use them for the intent of creating healing music. That intent is what I believe creates the good results people receive when listening to these tones. Moving along…

The musical harmonic series is based on one note as a “fundamental” or base note. It’s the note we hear and can reproduce by singing (or playing) along with it. The strength of each harmonic above the fundamental determines the “timbre” (how it sounds) of the resonating body producing the fundamental pitch. Every sound making device (musical instrument, voice, chainsaw, power tool, animal, etc.) has its own “voice print” much like we have individual DNA. There’s a device called a “spectral analyzer” where it shows which harmonics are present. No two people will have the same voice print. Timbre is all about which harmonics are the strongest. It’s also how we can tell the difference between a violin and a clarinet, male and female voices, different dog barks, car engines, etc. Have you ever wondered how a dog knows when his owner is home simply by the sound of the vehicle pulling up? Man’s best friend recognizes the harmonic voice print of that vehicle.

Figure 2 projects a 3-D image of a single pitch showing the harmonics that are present in the note of the instrument producing the pitch. Every audible sound looks different, just like our DNA’s differ from one another. The higher spikes at the back of the picture represent the lower pitches that are heard the loudest, or those notes closest to the fundamental. It’s easy to visualize the strong, weak, and even missing harmonics. There are some instruments, such as the clarinet (and organ pipes), that have missing partials. That’s why the clarinet overblows at the 12th instead of the octave. It’s a pesky problem for clarinet players because they have to learn two complete sets of fingerings, one for the lower register and another for the high register. The point is that all sound producing devices have a unique voice (sound) DNA that can be viewed through a spectral analyzer, as in the image above. It’s a form of visualizing sound, similar to cymatics that create beautiful shapes.

Figure 3 shows the musical harmonic series starting from the lowest “C” on the piano as the fundamental. The numbers refer to the partials, going all the way up to the 32nd partial. The higher the pitch, the closer the intervals become. Brass players use the harmonic series as the basis for producing pitches since they have only 3 or 4 valves. Take a trumpet, as an example. Press down the first valve to play an “F.” From that “F,” the performer adjusts his/her lips to reach the other notes in the harmonic series of the first valve. Pressing down different valve combinations creates a whole new harmonic series based off a new fundamental. Prior to adding valves to instruments, brass players were limited in the notes they could produce. This is one reason Baroque and early classical music has what we now consider easy brass parts. They were pretty much stuck with playing only a few notes. If they wanted to play in a new key, they changed instruments. (French) Horn players changed “crooks.”

A quick rundown of some musical terms: Temperament adjusts the distance between notes. Tuning adjusts a specific note or notes. Concert pitch sets the overall series of pitches within a specific temperament. One note sets the desired concert pitch and all other notes are tuned from that concert pitch within the desired temperament. The harmonic series is the basis for all temperaments because it involves tuning the distance from one note to the next. Just intonation is more than simply a temperament because a note is also adjusted based on where it fits within a chord. The only instruments that can NOT change from equal temperaments are keyboards and fretted instruments. All other instruments have the capability of adjusting pitches during a performance. Therefore, equal temperament is only a thing on keyboard and fretted instruments. However, all musical instruments follow the law of harmonics because every note produces the harmonic series.

The bottom line concerning the importance of harmonics – Whenever making decisions on what musical notes are represented in various cultures, it’s important to consider the harmonic series. People don’t think about how we’re being influenced by the law of gravity. It would be the same with musical pitches. Our senses naturally gravitate to the law of harmonics which means our music reflects what’s in that natural law. When I discovered a connection between the musical harmonic series, the Hebrew gematria, and the letters associated with that gematria, I knew I’d found the pattern I was looking for. Nothing else I tried worked musically. Had I not had a firm grasp of music theory and history, I’d still be looking for answers.

Here’s a sneak peak at the chart I assembled as part of this process. You’ll see the comparison between Hebrew gematria, partial numbers of the harmonic series, frequencies (pitches) in both A=432 and A=444. NOTE: The A=444 pitches are nearly 1/4 step higher than those in A=432.

In conclusion, the musical harmonic series is the basis of all sounds produced. Timbre is how we can tell the difference between the voice of a dog and a cow. The harmonics present in each voice determine what that voice sounds like. Without even knowing it, we subscribe to the law of musical harmonics because it’s part of nature. I find it rather interesting that an ancient language perfectly aligns with the harmonic series. Is that coincidence? You can be the judge of that. Feel free to leave your comments below.