“Cymatics?” you ask. Simply put, the term “cymatics” was coined by Hans Jenny in the 1970’s as a way of describing how to visualize sound. Up until recently, the only method of “seeing” sound was by taking a violin bow and rubbing it along a metal plate that was covered in sand. The sand (or salt) moves around on the plate, eventually settling into a shape that’s representative of a resonating frequency. 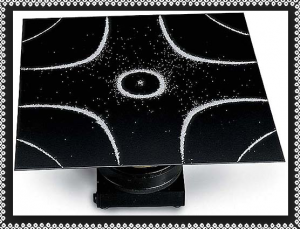 The best way to describe what this looks like is through pictures. For your viewing pleasure, here’s a picture with a beautiful sound formation. This is a “Chladni plate” after a tone has been resonated onto it (via an electronic device). As you guessed, a Chladni plate is named after the man who supposedly first used this method of seeing shapes of musical notes. I believe that was some time in the late 1700’s. Notice, I say “supposedly” because there is evidence of cymatics at least 400 years before Chladni’s time. I give you a full description in the video (at the end of this post).

I like rabbit trails and I found some pretty deep ones during my cymatics research. In the video version of my PowerPoint presentation, I go into more detail than I do here. In addition, there’s a link below the video where you can download a PDF of that presentation. All of the links in the PDF file are clickable so you can see where I found my sources. I hope you enjoy the rabbits trails as much as I did.

Here are the key points in the video:

Now, I take off on a tangent not in the video (below). When I realized that stone workers used cymatics on the ceiling of the Rosslyn Chapel to encode a musical work, it leads me to believe that it’s highly plausible we could actually learn melodies from hundreds of years ago where there’s no sheet music IF we can find cymatic music in other places. Remember, because cymatic figures register specific frequencies, if you can determine those frequencies, you have the exact musical pitch. In fact, they discovered that the cubes in the Rosslyn Chapel were all in the A=435 concert pitch. My question now is “Where else in artwork do we see cymatic figures?” Is it possible early musicians used cymatic music figures to pass along melodies to people who would knew what they meant? Inquiring minds want to know!

If you remember from some of my previous articles (about the solfeggio frequencies), the church had some pretty staunch rules about music writing. If you were a mystic or had other ideas outside the church, there had to be a way of putting into code what you needed to say. People risked death for engaging in things not sanctioned by the church. My guess is there’s a reason the stone masons put a musical melody into the cubes of the Rosslyn Chapel. We may never know why but it is very intriguing!

How can I be so sure the cubes represent musical notes? We all know what forensics involves, correct? When you’ve studied something your entire life, chances are that you know a lot about that subject. People had looked at 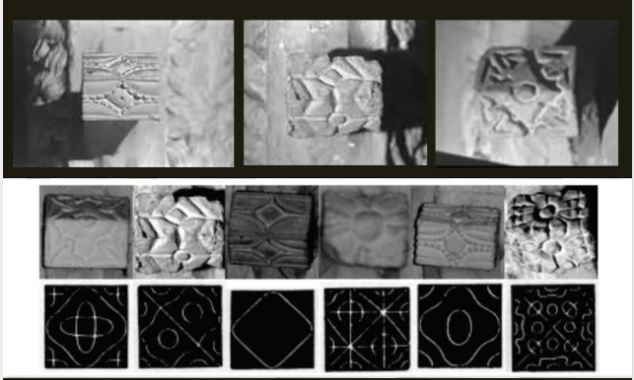 those cubes for years, not able to understand what they represented. Along comes a man named Thomas J. Mitchell, a specialist in Renaissance music. Taking what he knew about the music of the era, he began to piece together what he saw in those cubes. Clues were also found among the angel musicians at the beginning of each arch. Mitchell doesn’t call himself a forensic musician. That’s what I call him to help others understand the process he needed to go through to get to his conclusion. Why was no one else able to decipher this code? None of them were musicians who understood the performance practices of Renaissance music. Like any good forensic scientist, it requires deep knowledge of the subject you’re investigating. It would only make sense that a non-musician wouldn’t understand what the cubes represent. There are those who say because some of the cubes are missing or in the wrong order (because some were fixed in the 1800’s and replaced), you can’t make that determination. But, that’s what forensics is all about. Scientists take what they do have and make conclusions based on the whole of what they see. So, maybe not all the cubes are in the right order but, a musician who understands writing of this era would be able to recognize that and switch the notes around to fit the musical style of the day. I’m sure Mitchell utilized plenty of music theory to help him along the way.

I’ll go into more detail on Mitchell and his son in a later blog post. For now, if you want to hear and purchase the music of the cubes, CLICK HERE. Stuart Mitchell is the composer who “realized” the Rosslyn Motet. All I can say is that it’s a beautiful piece of music! 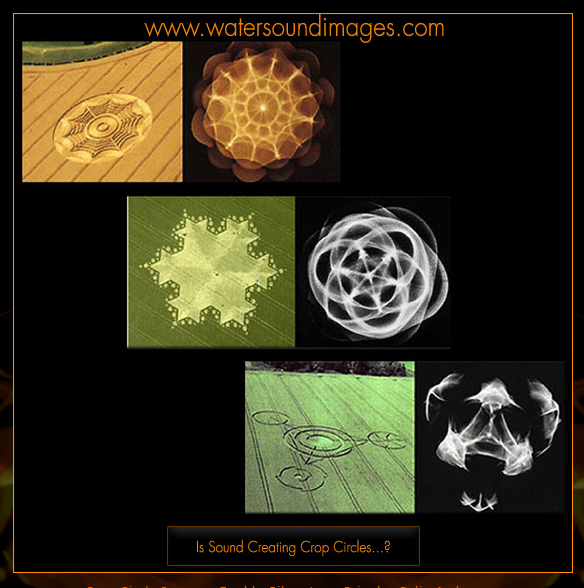 There’s one last bit to propose before you watch the video. We already know cymatics was used for the cubes in the Rosslyn Chapel. That leads me to believe there are other cymatic figures probably in odd places or cathedrals all over Europe and possibly other locations as well. If they have been found in Egyptian tombs, then they are other places as well. People understood that you could literally put in stone a musical phrase and someone could come along and sing it based on those shapes. Although we now have access to 3-D cymatics (via the cymascope as in the pictures next to these crop circles), before the late 1990’s, everything was based on what could be seen on a Chladni plate or a device like the Watts-Hughes eidophone.

Why are cymatics important? There’s way more to this story than what’s in my video presentation. This goes into how what we say frames things. Thoughts and intents are WAY more important than we realize. And, we’re now starting to see the reality of that in cymatics. Basically, cymatics is truly “sound made visible.” I’ll present much more on this subject as I continue to research.

With that, enjoy the video presentation with all my cool pictures! Don’t forget to download the PDF file that links you to many resources.